The new battlefield in the information war

In the modern war of information the new battlefield is the intangible science. It is more important what the information hides than its own content. The contents are at reach for everybody, but what they hide is not. It is not the secret information that gives you the advantage as it has been in traditional wars, but is the ultimate domain of the intangible resources what makes winning or loosing the war.

For example, the desinformation is not only on the fake news but in the millions of messages that society directs and that it moves its opinion, as like their behaviours and reactions which eventually transform in political results, as well as finances and economics. It’s important to decode and analyse the big data of all those millions of messages, and that is the best information to design the future strategies. The case of Cambridge Analytica and Facebook that gave the victory to Donald Trump as US president is part of this war of information.

In order to win the battle of information you always have to be one step ahead. Even through the overall news cicle looks spontaneous, it is design so to mask and covert their real goals of those who do it. And they will win if you don’t detect it early. Once it’s happen it is to late. You lost the initiative. It’s the case of indignados, which have been the principal arm of the anti system and radical groups, and populist parties around the world, in order to get their momento, infiltrate and win power in west democracies.

What makes winning the war of information

The decisive tone in the war of information is not what has happened, but to unmask what makes it happen, in order to know what will happen and react before it will happen. And that, you can only accomplish with a smart domain of intangible information which the enemy uses. And that is why there are labs dedicated to this field. 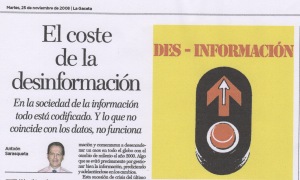 In the war of information you have to distinguish two levels. The one that takes in cyberspace where there is the best technology, and hackers which have become the kings of this business, and the other level is in the field of the science of intangible, which is also known as the space of invisible. And is in this level where the information moves between the diffused, confusion disruption or rupture of the system, the manipulation of minds and conscience and other aspects not perceptible at first sight which eventually end up determining the configuration of the strategies which they eventually apply utilizing the new means and technology.

Since many years there has been million of dollars invested in the development of programs, being scientific and technological to manipulate the conscience of people and to condition their own perceptive system, which are being applicable in the war of information in order to create tendencies, opinion, and mass movements.

In order to win the information war you obviously need brains and tech resources that can dominate the dimension of the information and its intangibles, which is the base of all winning strategies. And here is the level where you dispute all the power battles.

If you don’t understand this new dimension for the war of information, it makes a lot of strategies in order to combat the enemy it really is beneficial for him. What you can call “work for the enemy without you knowing it”. That is my experience in decades of working in this field.

Select your language for this web

The new battlefield in the Information War